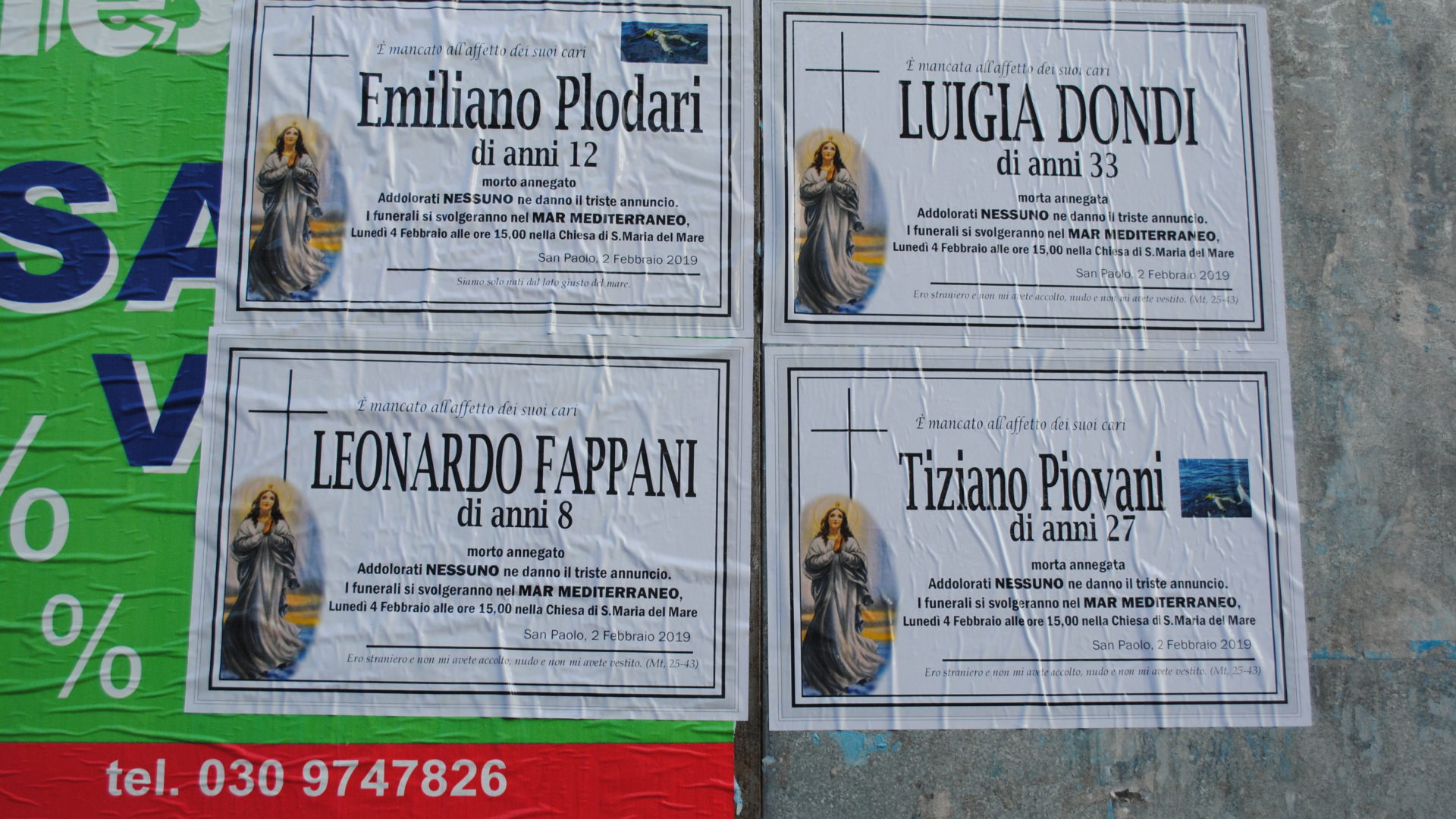 Funeral posters are widely used in Italy, especially in non-metropolitan areas where they are a powerful vehicle of information and a means of involving the community in processes of mourning.
When last month 117 migrants died in one night in the Mediterranean, the anonymous creative collective of Surtie decided to reflect on these deaths and on the fact that many of the migrants buried in the sea are still unknown, unnamed. They reflected on this anonymity, wanting to give them a name; moreover, we wanted to force our small community to participate in the mourning, trying to disturb the indifference with aesthetic means. But foreign names or numbers, like 117, are too far removed. So 50 fake funeral posters with 25 fake local-sounding identities have been created, announcing deaths at sea, and then displayed anonymously around San Paolo, a tiny village in Northern Italy (in the Brescia region, 75km from Milan). The location was selected to send a message from and to a peripheral place, confident that the action would have a stronger impact. 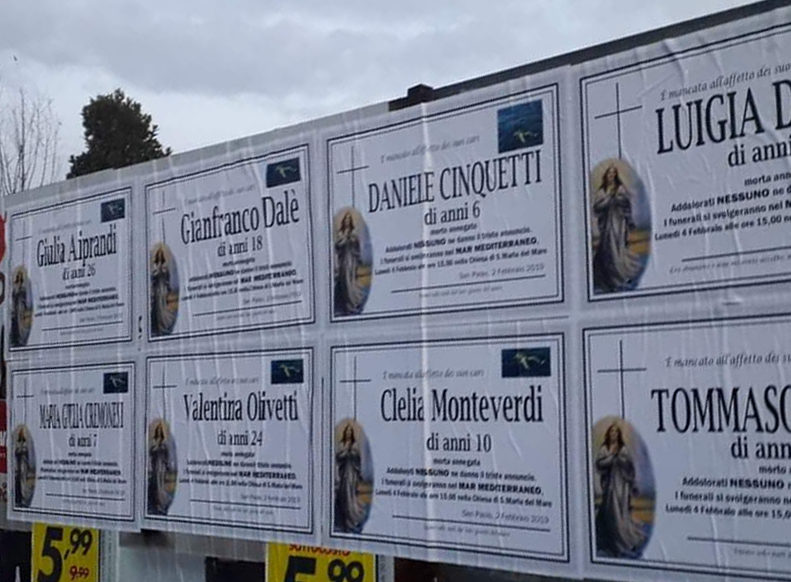 The posters features invented names and surnames that are widespread in the area but are not in use by the real inhabitants of San Paolo, such as Luisa Pasini, Clelia Monteverdi, Leonardo Fappani and Aurora Alloisio, with different ages – mainly young. Names are followed by the statement of death by drowning (morto/a annegato/a, ‘drowned’). And finally, the following text imitates real Italian funeral posters:
Addolorati NESSUNO ne danno il triste annuncio.
I funerali si svolgeranno nel MAR MEDITERRANEO,
Lunedì 4 Febbraio alle ore 15,00 nella Chiesa di S.Maria del Mare
(The bereaved NOBODY makes the sad announcement. Funerals will take place in the Mediterranean, on Monday, February 4th, at 3 p.m in St Mary Star of the Sea’s Church.) 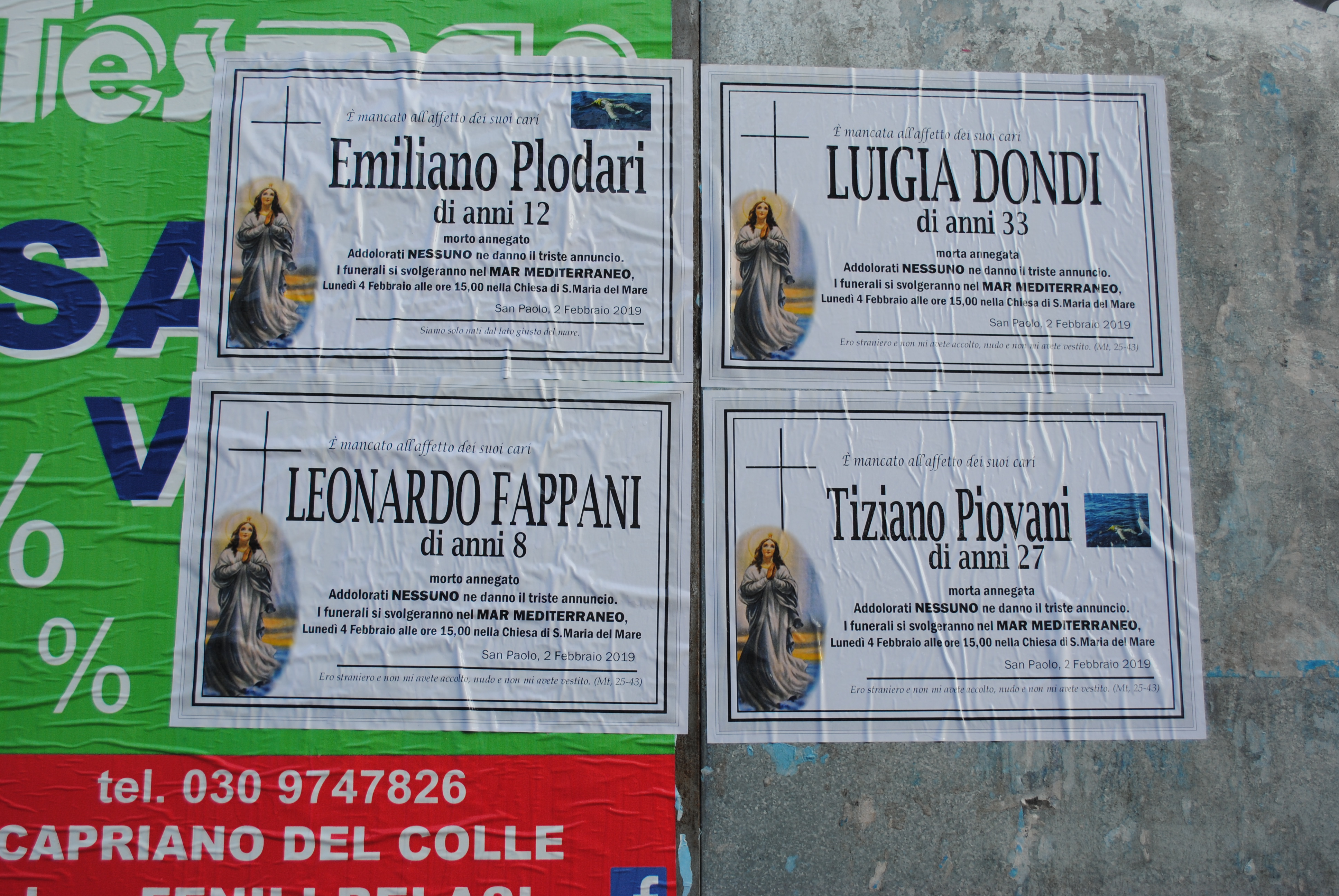 On the bottom-left an image of Mary Star of the Sea with a statement aside: the well-known line from the Gospel of Matthew (25:43) ‘I was a stranger and you did not welcome me, naked and you did not clothe me’. Or alternatively the text ‘we are only born on the right side of the sea’.
On Sunday night, 50 posters were stuck near schools and churches, in thoroughfares. The aim was to cover as much ground as possible, making it an aesthetically striking experience.
The action polarized the local community: some appreciating it, others deploring it as macabre. The event was featured widely in the media: first by a local newspaper and on social media and the following day on national newspapers and radios.